I've created a new video book trailer for The Forgotten Origins! Check it out, and let me know what you think!

Bloodline in Running for Top 50 Indie book of the Year!

I was thrilled to find out today that Bloodline made it onto the 'short list' for one of the top 50 Indie books of the year on readfreely. According to their site, some 5,000 books were nominated and to make it in the top 90 (finalist) is cool enough...but to have a chance at being on a top 50 list for a year is a really great opportunity!

SO...I need YOUR help! Please Got to this link and vote for Bloodline! There is NO registration (or anything else) required, to cast your vote. You have the option to enter into a drawing by submitting your email, but you don't have to.

Thank you for your support! 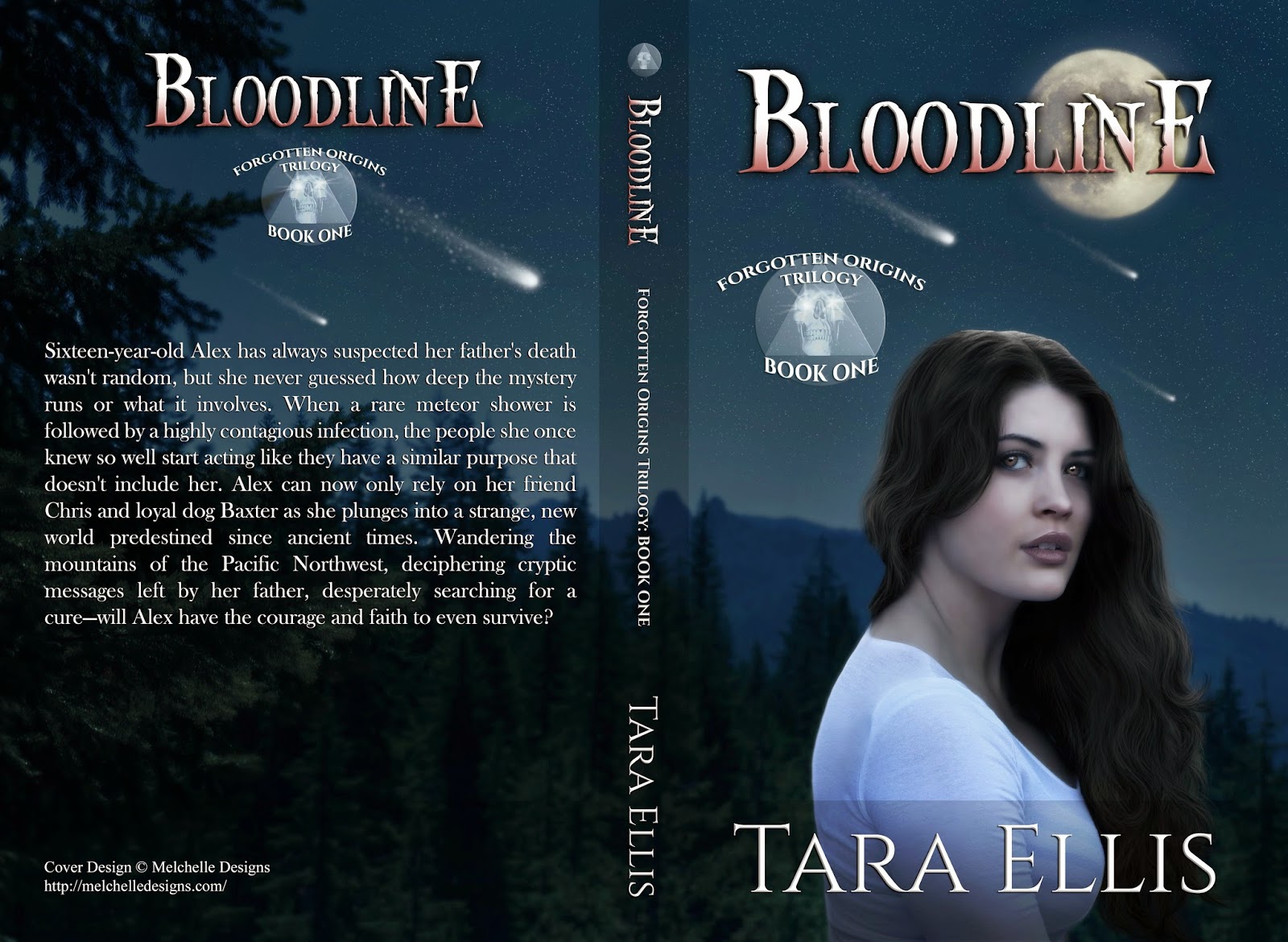 Bloodline Audiobook to be released soon!

I can't believe it's been nearly a month since I updated this site!

I have been working very diligently on the audiobook for Bloodline, and I'm VERY happy to have it completed! It is currently pending review and then distribution from audible.com. It will likely take at least a week for it be up for sale, but at that time I will make some free codes available!

Descent is still in a giveaway on Goodreads, so if you are a member, be sure to enter for your signed paperback copy! (see the button in the post below)

The trilogy has over forty reviews and a 4.8 rating on Amazon now. It will be exciting to hit the 50 review mark!

I set up an account on a cool website called, The Imagine Film List, where you can suggest a book be made into a movie. I have had numerous readers tell me Bloodline (and the trilogy) would make an excellent movie, so click on this link and check it out and show your support! IF List


Amazon has set up a cool page for the trilogy: Trilogy page  (did you get your copy of Descent Yet?)


1 of 1 people found the following review helpful
5.0 out of 5 stars FREE COPY FOR AN HONEST REVIEW!,
By
Stephanie moore - See all my reviews
This review is from: Descent: Forgotten Origins Trilogy Book 3 (Kindle Edition)
One of my top favorite trilogies! Alex is still trying to help find a cure, while trying to keep everyone who she loves safe. Alex and Chris’s relationship changes. “UNITED WE STAND DIVIDED WE FALL!” This book was my personal favorite. The only thing that I would have liked is for more books!
Tara Ellis is an amazing Author! She executes thoughts and she has well written this trilogy.


Thanks for your support!!

Giveaways for TWO books from the trilogy!

See the giveaway details at Goodreads.

See the giveaway details at Goodreads.

Enter to win
Posted by TARA at 9:27 AM No comments:

Descent has been out for just over a month now, and while reviews are always extremely hard to come by (you authors know what I'm talking about), I have so far had five of them on Amazon (all five stars). NO they aren't paid. :)

Actually, two of them run blogs and have read (and reviewed) the whole trilogy now. I am finding that for an Indie author, such as myself, these blogs are an incredible way to promote and get exposure. Goodreads is another great way.

I finally clicked on the 'run a book giveaway' button on Goodreads and went through the motions. Basically, you put up however many copies you want to give away of your paperback (or hardback) book and set the time period, etc. (I also limited mine to the States. You'll want to do this too, depending on what country you're from. Overseas shipping is VERY expensive!) With Bloodline, I ran it for about a month and had over 700 people enter! Of those, about 400 of them added Bloodline to their bookshelves, which then in turn exposed it to all of their friends. (which in some cases, is thousands) So while yes...most of the people entering probably just go for the free books and rarely actually buy them, I think that it did generate a few sales and more importantly, gave me some great advertising. I gave away four copies of Bloodline (extras I already had) and the shipping was $10.00 total. (be sure to go USPS with the book rate) Bloodline is now spread out across the East Coast, being read by people who would probably never have done so otherwise. Who knows? Maybe they'll like it enough to either write a review, read the next book (Heritage) or even better...give the copy to a friend!

Heritage is in a giveaway right now:link

It's been just over two weeks and over 100 people have entered. I just put up Descent also, to give away two copies, and in only four days, almost 80 have signed up. I take that as an indicator that the cover for Descent is maybe the one that grabs the reader the most. I would have to agree. Who doesn't  want to look inside when they see a young, strong girl holding a automatic rifle on the cover? :)

Here's a link to the reviews for Descent:
Gimmiethatbook:link
A word at a time:link
I'm going to include here, a review from a reader from Goodreads:

5.0 out of 5 stars A great ending to a great trilogy. October 17, 2014
By MissezMathis
Format:Kindle Edition
I'd like to start off first by saying thank you, to the author, Tara Ellis for gifting this book to me in exchange for my honest review.

Second, I'm going to say that Forgoten Origins is my favorite YA/SCI-FI series of the year!! I really love how the author derived the premise of the series from the Ancient Alien Theory then made the rest her own. I found it it to be extraordinary. It made me, the reader, think. Even after I read the book. I'll probably still think about this book for months to come because to me, it's not too crazy to think, that this might not be far from an actual reality. Alex is finishing off her quest in this last installment. Along with figuring out where & with whom her heart belongs. Alex and ALL the characters have grown and matured. Some have grown together or they've grown apart. It was sad due to the fact I seriously thought that a certain couple would've stayed together but they did not. However, as the book progressed, I could see who was to be with who and the reasons. Which made their character development so enticing. I really had Rihanna's Stay in my head for that couple. It was kind of messed up but they did remain friends. Third Alex & crew are busy saving the world from imminent slavery & doom. It was adventurous, suspenseful, and a bit breathtaking. The undersea dome, Nibiru, and Nator's reaction to seeing a sunrise in over a thousand years, were some of my favorite moments. Page after page you're just enveloped in this tale trying to get to the end wondering if it'll end with that bang it started off with. I really did feel this story was about freedom, keeping our humanity, faith, and last but not least, friendship and family. Nothing in this world is worth giving up all those things or giving up on. A wonderful message for anyone who has been through any type of adversity. You really can do anything as long as you have faith & are fighting that good fight. The Epilogue was pretty awesome. The author could do a spin-off if she wanted to, go into more detail of the world afterwards. Maybe a Novella? I'm just throwing it out there. I do have to say Seth has made it on to my favorite Alpha Male list to swoon over. He's pretty hot. *giggles* All I know is this series has made a definite impression on me and I can never forget it. Truly astounding & truly original. I cannot wait to see more from the author in the future.

Getting that kind of feedback is amazing! I am so happy with how Descent has been received, and I'm excited to continue working on getting my trilogy out there in front of the readers! 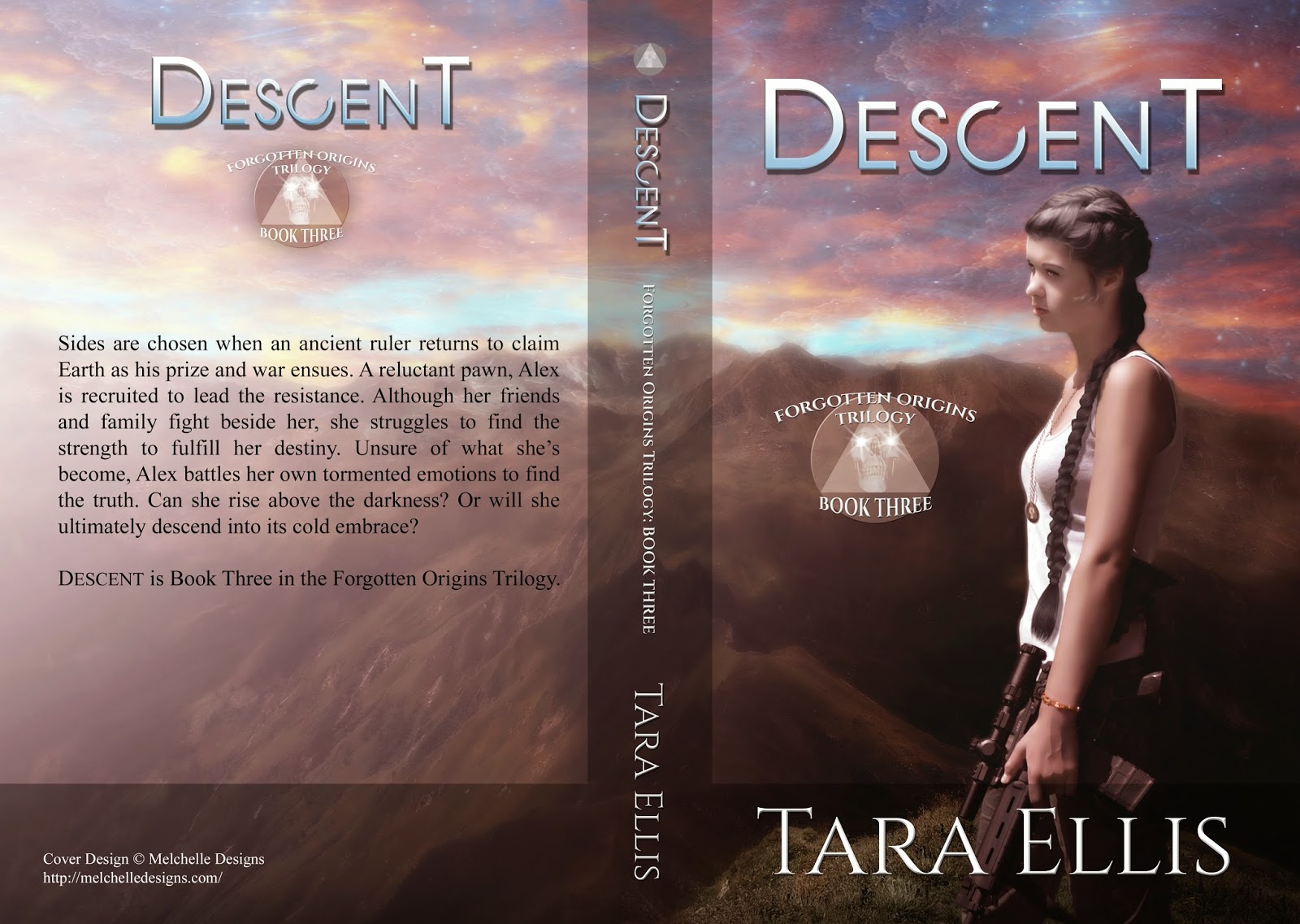 The Forgotten Origins Trilogy is COMPLETE!

It's been a journey for the past year-and-a-half, but I would most definitely do it all over again!

I absolutely LOVE this story. As a HUGE scifi fan, that prefers dystopic, medical thrillers, it's my perfect storm.

Things have been happening lately, and I'm feeling hopeful that I'm gaining a larger audience. If you happen to be visiting my site for the first time....welcome!

All three books: Bloodline, Heritage, and Descent are available on Amazon: Amazon link to books


I have had several reviews and blog interviews lately! Here is a short list of links to my favorites:


I have been having an amazing time, learning how to reach out to the right audience,and share my story with you. THANK YOU for coming along!!

I know some of you have been waiting for it, so I'm going to entice you a bit more with the first chapter! :) 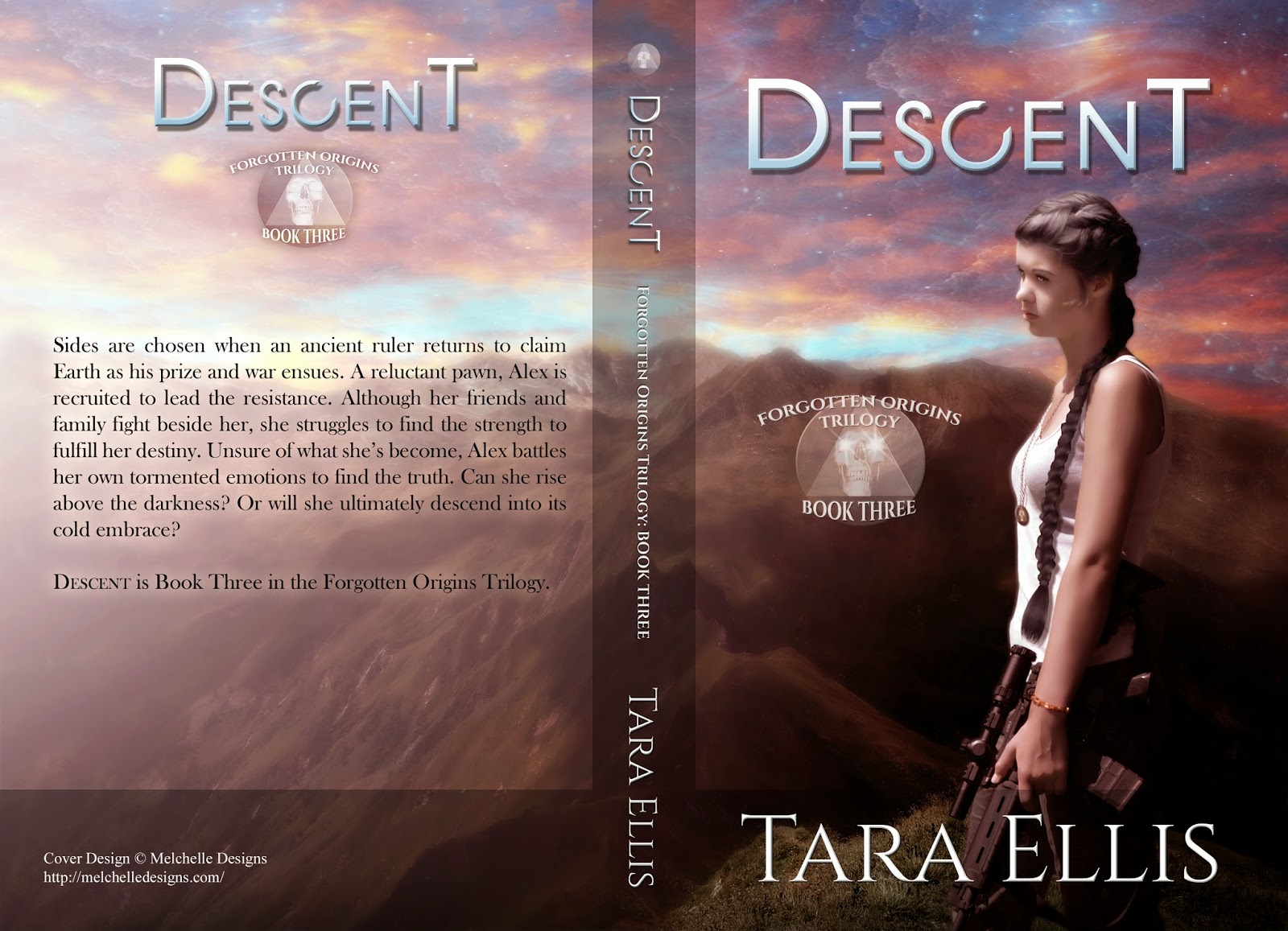 There you go! Not much longer to wait until  you have the rest. Descent is a long one....around 400 pages, printed copy. It's an epic story and it's my favorite of the three in the trilogy.

Amazon link to all of my books!
Posted by TARA at 9:43 AM No comments: 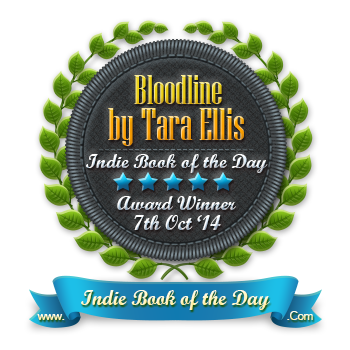 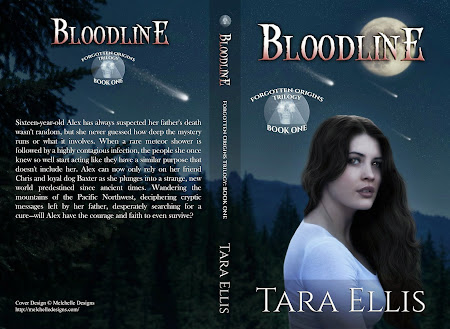 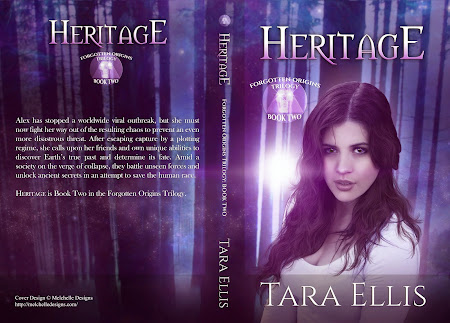 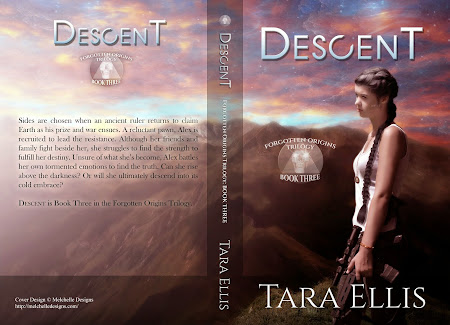